A walk through the recent history of Lanzarote: from the ‘Maretón de Yuco’ in La Vegueta to Masdache – La Geria 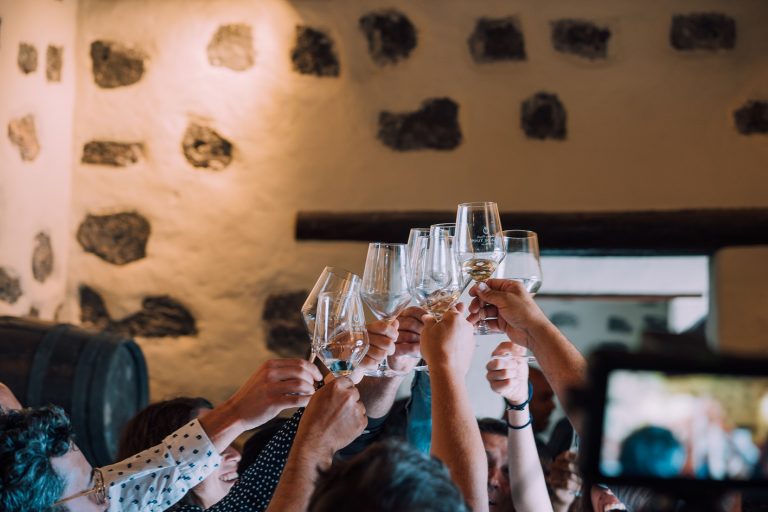 Bodegas Vega de Yuco celebrated its 25th anniversary this past weekend with an event, shared by the winery's owners with all its staff and organized in Finca Testeina, the latest wine tourism project that the winery is now embarking on after these two and a half decades.

Coinciding with this date, Vega de Yuco also wanted to take advantage of this event to present its new wine ‘Princesa Fayna’, the first sparkling wine from the winery. A Brut Nature made from Diego grapes, produced using the traditional method and aged for 30 months, with a disgorging date of March 2022. The 25th anniversary commemorative wine has a current limited production of only 600 bottles that are marketed, for the moment, in the geographical area of ​​the Canary Islands.

Similarly, in this act, the attendees were able to enjoy two innovative wine tourism experiences which the winery is working on ahead of the forthcoming opening of this emblematic place in the Protected Area of ​​La Geria.

A visit and self-guided tour with augmented reality, through a mobile application through the more than ten interpretation points that have been developed around the historic house, vineyards and Testeina volcano, and a pioneering experience in the Canary Islands of musical pairing and synesthetic tasting (Wine Rhapsodies 360º) for this exclusive, elegant and modern sparkling wine from Lanzarote, were some of the experiences that completed the 25th anniversary program and that the winery intends to share with all the visitors of its new project soon. . The musical play 'Princesa Fayna' was presented by the creator of the work, a Canarian musician-composer and precursor of this experience in Spain Samuel Miranda.

The event was paired with a special catering, prepared by the renowned northern chef Nauzet Santana of the , daughter of the aboriginal queen of Lanzarote Fayna who also gives her name to the new brut nature of the winery. These two stories will also pair with rosé from the Varadero of Puerto del Carmen. 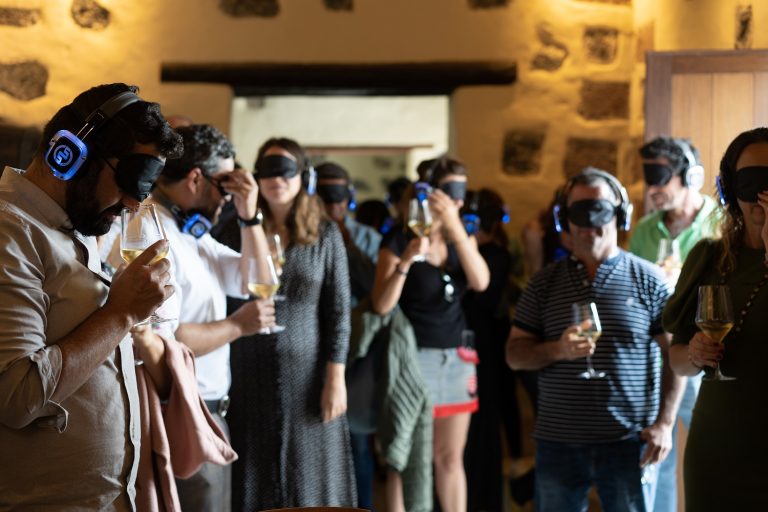 During the event, the winery also made a brief tour of its history and background. 25 years marked by various relevant milestones in its journey since that April 23, 1997, date on which it was established as a winery in a small warehouse in La Vegueta (Tinajo), specifically in the area of Yuco marathon” which gave him his name.

From La Vegueta it was moved after three years to the Teguise Agro-industrial Complex, first to the complex's warehouse facilities and then to the old fried sweet potato factory, where it would remain until 2001, when it was permanently installed in its current location, the Loin of Tese, in Masdache.

History of its wines

From that extraordinary first harvest of the summer of 1997, a small production of the first wine is born Vega de Yuco, with its four references (dry white, semi-sweet, rosé and red). A wine that has not only preserved the identity of that time, but after five decades it has established itself in the Canary market and outside the archipelago due to its recognized quality. 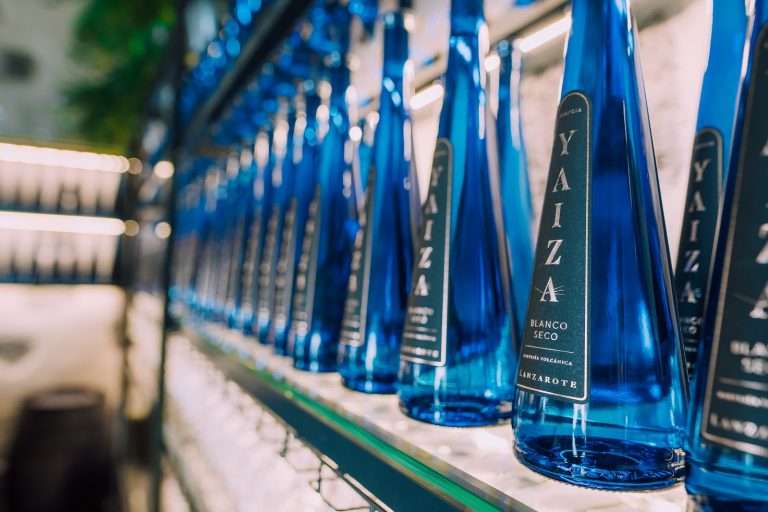 Eight vintages later, in the year 2005, the second important milestone for this winery arrives, with the birth of the renowned wine essence Yaiza. Its unmistakable blue bottle forms part of the identity of the winery and is also recognized outside the borders of the archipelago as an icon wine of the island, also backed by its quality.

The first bottles were created in a factory in Ormelle, near Venice, and inspired by the handcrafted and famous blue crystals of the Murano factories.

In its early days, it was not easy to adapt the bottle to existing bottling and labeling systems. “We had to cut the arms of the labeling machine to fit the bottle”, he recalled Rafael J. Espino Curbelo, owner and manager of the winery. Years later, its manufacture moved to the Canary Islands and moved to a Spanish factory, where these unique and decorative bottles are currently made.

Regarding its label, it has gone through several transformations of image and visual identity. From the first, which was designed by Rafael himself, to the last update of the corporate image of the winery that took place in 2018.

In this first decade (1997-2017), the winery works with the four Vega de Yuco references, the white Malvasía Volcánica, the rosé and red from Negro list, and a semi-dry then Vega de Yuco. By changing the European regulations and standards and having to apply the new denomination of "semi-sweet" to wines that until now had been considered "semi-dry", the winery chooses to adapt to the demands of the market and baptize its semi-dry Vega de Yuco with the name of the Guanche princessBodegas Vega de Yuco celebrates International Women's Day with the 'Toast to Women' event”. The first princess of the saga of wines with Canarian names that would be born years later. 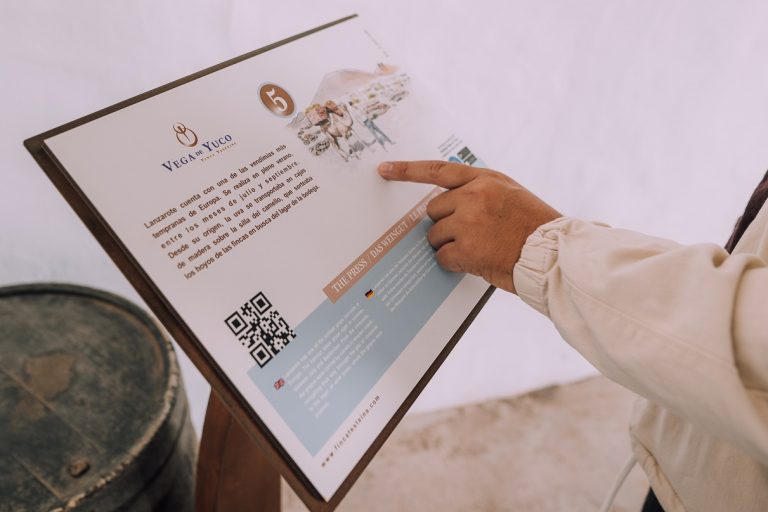 From this second stage, are also born, among others, los liqueurs. They were made with products from the land, seasonal products. “If there were blackberries, we made blackberry liqueur, if there were herbs, herbal liqueurs were made... all with traditional recipes and the contribution and good work of our winemaker”, Rafael pointed out with longing. A stage in which he worked side by side with his former friend and winemaker, José Ramón Fernández Romai, nicknamed as the “Gallego”, whom the winery will always remember with special appreciation and affection.

After Yuco and Yaiza, in 2010 Another jewel arrives at the Bodega. + Roof It is a set of letters and symbols that phonetically translate into the name of the town of "Masdache", the payment of the municipality of Tías where the winery is located. A clear wine Canarian-Portuguese influence. They are the representation on the island of the renowned Portuguese wines.

In this same decade, in 2013, another important milestone was given. A special edition for superstitious, 2012+1. On August 25 (San Ginés festival) of that year “2012+1”, Lanzarote already had its first bottled wine. A harvest that was also extraordinary, according to newspaper archives, for its quality and volume.

In the last decade and current stage Other important milestones are produced from the winery. The birth of the line organic wines of the winery and the Premium line Princesa Gara of the year 2018. New qualitative leap for the winery with these wines for aging and limited production. Once again, Vega de Yuco acknowledges its origins, baptizing this new line of wines with the Canarian name of another Guanche princess. 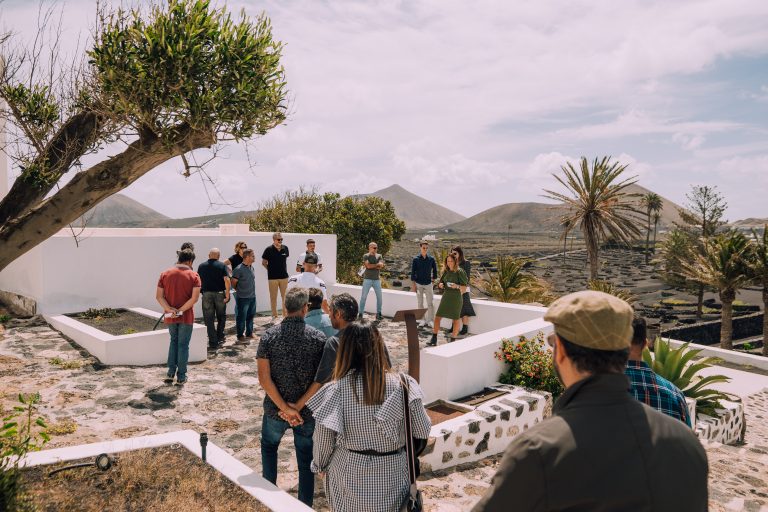 Special mention to one of the latest projects in which the winery embarks. Finca Testeina, the project that unites and encompasses all the values ​​represented during these 25 years by Bodegas Vega de Yuco. The house passed into the hands of the owner of the winery in 2017. In his bid to preserve the heritage of the island's viticultural, agricultural, cultural and heritage culture, he undertook the project to recover this space.

“Finca Testenia should not be the heritage of a few, it is a place to share it with everyone”, affirmed Rafael J. Espino. The first documented references to the house date from the S.XVI, and was registered for the first time in the official register in the year 1.800. 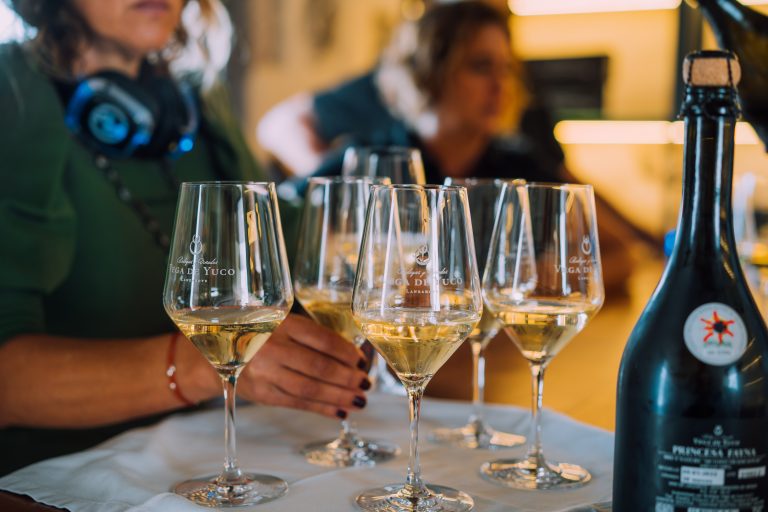 The last milestone of the winery arrives in This first edition, with a disgorgement date of November 2021, has been marketed since the end of 2021, for the time being, in the Canary Islands. A modern, delicate and elegant Brut Nature, which at the same time exudes respect for the territory and the traditional viticulture of Lanzarote., more precisely on December 24, 2021 with the release of the first 400 bottles of its first Diego grape sparkling wine, Princesa Fayna. A Brut Nature made by the traditional method (champanoise). The first disgorgement of the wine took place in November 2021, with an aging of 24 months. In March 2022, a second disgorgement with another 600 bottles on the occasion of this 25th anniversary of the winery, date on which this wine was presented.

This Brut Nature is born from a small plot located on the slopes of the Juan Bello Volcano and once again bears the Guanche name of which it was queen and lady of Lanzarote, Fayna, wife of King Zonzamas and mother of Princess Ico.

the wine breathes modernity, elegance and respect for the traditional viticulture of Lanzarote, represented in this minority grape on the island, as a tribute from the Winery to the work of all the winegrowers.